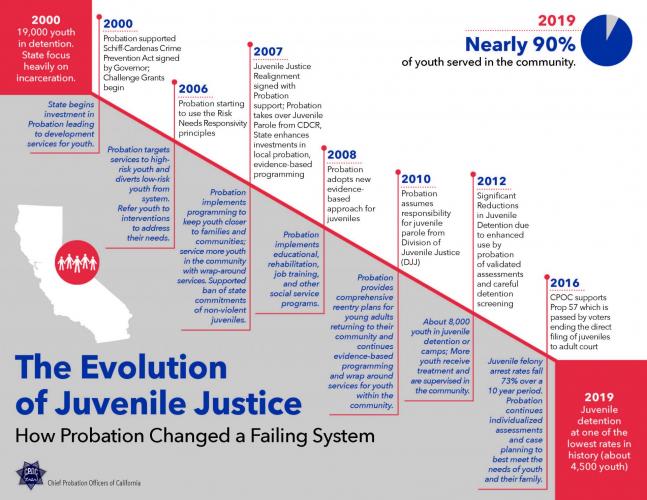 IN CASE YOU MISSED IT…

Chief Probation Officers of California: Elevate Justice Act Will Help All Teenagers to Receive the Supports & Services Needed for Change

Sacramento, CA – August 14, 2020 – The Chief Probation Officers of California (CPOC) support the Elevate Justice Act (EJA) that would raise the age of juvenile jurisdiction to 20th birthday; allowing 18 and 19 year olds the benefits of rehabilitation, mental health and counseling services. The EJA is based on extensive research on adolescent brain science that 18 and 19-year-olds are impulsive, make rash decisions ignoring long-term consequences of those actions focusing rather on their immediate gains, good or bad. Emerging adults are more amenable to rehabilitation because their brains are still developing and therefore can incorporate and adopt new ways of thinking leading to lasting change.

How California ultimately decides to transform juvenile justice will have long-term impacts on families and communities for generations. This transformation will influence whether young adults sink deeper into the criminal justice system or rehabilitate into independent individuals. It’s time to embrace further reforms that will make a difference, provide emerging adults an opportunity to rehabilitate. While some are focused on realigning the Division of Juvenile Justice to county probation, the focus should be on enacting science-backed reforms, like the Elevate Justice Act, that would benefit youth, young adults and the community. The Elevate Justice Act would leverage the success of local juvenile systems where we have reduced incarceration, reduced recidivism, reduced trauma and improved the lives of thousands of our highest need youth in the community. Let’s embrace science-backed policies that limit disruption, provide accountability, encourage support and are proven to make a difference in youth and emerging adults’ lives. Now is the time.

Opinion: Young offenders don’t belong in adult prisons. California has a chance to end the practice

The policy shift makes sense. We all want the same thing for youth who get into trouble with the law: a system that makes them less likely to re-offend and more likely to live happy, productive lives. During late adolescence, youth form their understanding of themselves — and prison is no place to do that. Engaging them in education, community service and work with those their own age, rather than in an adult prison, has the potential to steer them toward more successful lives. The youth justice system, though imperfect, is a more developmentally appropriate alternative, with more rehabilitative off-ramps than the punishment-focused criminal justice system…A growing body of developmental psychology and brain research also shows that young adults’ brains haven’t finished developing and their personalities are changing, making them more amenable to rehabilitation… It is right to kick the tires on the chiefs’ proposal. But in the final analysis, a proposal that increases the chance that young people graduate from the justice system and go on to live productive lives has the potential to improve the safety of all Californians.

Opinion: Why juvenile court jurisdiction should be expanded to age 25

It is well known that youths in the juvenile court system (both juvenile justice and dependency) do not do well when they age out of the system at age 18. Statistics demonstrate that these are some of the most at-risk persons in our society. Most are not prepared to live independently, often having no family to return to. They are likely to be unemployed and homeless, to turn to criminal activity and be incarcerated. For those who were in school, aging out often means they could not continue with their education…

“If the intention of our criminal justice system is rehabilitation,” said Harrington, “the juvenile justice system provides a better pathway forward by looking at youth more holistically in the context of their family, school and community.”

“The record shows that young people treated in the juvenile justice system fare better and the community becomes safer,” says Suffolk County DA Rachael Rollins. “By pushing these young people, who research tells us are still developing, into the adult justice system, we are willfully ignoring decades of data and developmental science and failing to protect the health and safety of communities as public servants are sworn to do.”