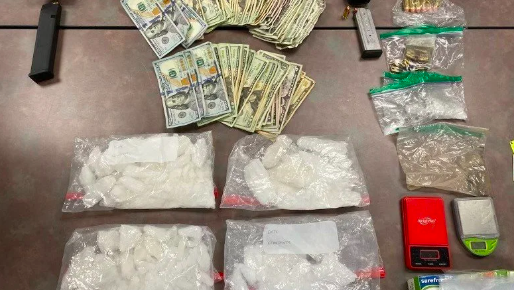 In FOX 40 by Matthew Nobert

GALT, Calif. (KTXL) — The Sacramento County Probation Department reported on Thursday that they seized several pounds of drugs and multiple firearms during a bust in Galt on Wednesday.

The probation department said that, in partnership with the Galt Police Department and the Sacramento County Sheriff’s Office SWAT Team, it served a search warrant to a Galt home on a Probation 63 approval.

When officers arrived at the scene a person with a gun ran out of the home, according to the probation office. Probation officers were able to secure the perimeter and apprehend the person.

The probation department said that 12 additional people were detained, four people were arrested and two people were given citations.

During a search of the home officers also seized 2 1/2 pounds of methamphetamine, 16 grams of heroin, nearly 2 grams of fentanyl, two semi-automatic handguns with extended magazines, $1,891.00 in cash and ammunition, according to the probation department.