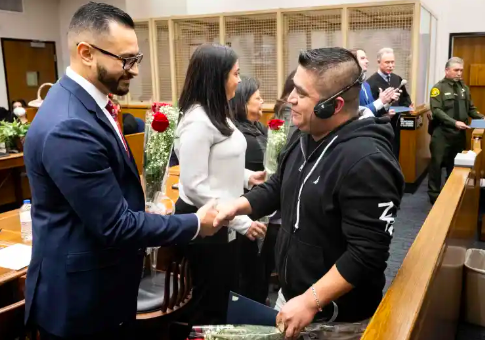 From Sean Emery in the Orange County Register

A proud Judge Matthew Anderson — who has run the DUI Treatment Court at the Harbor Justice Center for nearly two decades — watched as a half-dozen new graduates described their success in a rigorous rehabilitation program that they credited with saving their lives, and that law enforcement officials credit with saving the lives of countless other motorists.

The graduates related their tales of hardship, including repeated DUI arrests or hospitalizations and watching loved ones walk away as their alcoholism and related addictions spiraled. Now, the graduates celebrated their sobriety and reclaimed lives, speaking of their newfound focus on family, friends and careers.

“I know this program has helped save my life, and so many other lives,” a woman who was graduating from the program told the judge.

Joining in the event were leaders in the county organizations that partner with the court to make the DUI Court possible, including probation, the county healthcare agency and the district attorney and public defenders office. All touted the program, which began in 2004, as a way to improve lives and reduce recidivism without resorting to incarceration.

Judge Anderson — who is preparing for his own coming retirement — was taken aback at the size of the crowd as he entered the courtroom, describing himself as “overwhelmed and overjoyed.”

“This is what happens when the world changes one person at a time,” the judge said. “You are in a room full of miracles.”