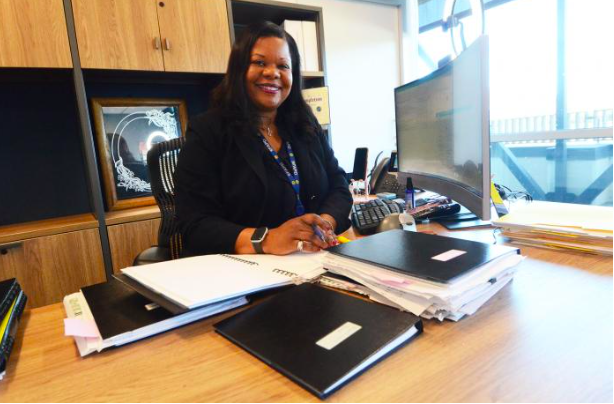 In the Bay Area Reporter by Eric Burkett

Cristel Tullock recalled a time back in 1990, when on the Arsenio Hall Show, gay icon Madonna said she liked hanging out with the Black kids because they got away with more.

“Cause all my girlfriends were Black and it seemed their parents were more lenient than my parents,” the singer told Hall. “And somehow, I had it stuck in my mind that because they were Black, they had more fun. You know, my parents were really strict.”

Madonna probably intended it as a compliment, but not everyone saw it that way.

What Tullock, who started her job as chief adult probation officer for the city and county of San Francisco almost one year ago in January, remembers most about that interview was the ensuing outcry from Black parents, offended by the implication that they, somehow, didn’t care about their kids.

“And how that had a kind of sense of — we’re just a free-for-all. No, we’re kings and queens,” said Tullock, a San Francisco resident and mother of two children, in a recent interview with the Bay Area Reporter. “The history of Black people and Latino people is so profound, why would you think we don’t want order?”

The fact that that particular celebrity interview has stayed with Tullock, a Black Latina lesbian, and a first-generation American, probably says a lot more about her than it did about Madonna.

Tullock, who declined to state her age, was promoted to chief adult probation officer after 22 years in the adult probation department, and she carries a great deal of that sense of responsibility to her communities with her. She’s the first African-American to head up the department and the first Latina, as well as the first lesbian.

In fact, she was also the first such appointment in California, until a month or so later when Tamika Nelson, a Black woman, took the same position in San Diego County. And Tullock brings all those identities with her as she carries out her duties.

Studies on San Francisco’s criminal justice system have raised concerns that people of color, particularly Black incarcerated individuals, face discriminatory treatment and longer stays in county jail. A report by the San Francisco Adult Probation Department – the Community Corrections Partnership Plan of 2021-2022 – found, for example, that 45% of people incarcerated in June of 2021 were Black and 22% were Latinx. Blacks and Latinx people make up 5.1% and 15.2% of the city’s population, respectively. Whites, who comprise almost 45% of the population, made up for only 22% of the city’s jail population. Asians, at 34.3% of San Franciscans, accounted for 7% of the jail population.

“San Francisco’s jail population was also characterized by racial disparities, with the per capita incarceration rate of Black people 17 times that of white people,” according to the Safety and Justice Challenge report, issued by the McArthur Foundation earlier this year, “and young men of color also had significantly longer stays in jail compared to white people.”

It’s statistics like these that have convinced Tullock the best way to overcome the challenges of the racial disparities in the city’s criminal justice system is to be part of the system by taking on a role that allows her to directly address the issue. The problem is too often summed up by those who look at the issues from a theoretical perspective, Tullock said.

“What gets overlooked too much is, if I’m directly impacted by something, you need to make a seat for me to help inform where we go,” she said.

Tullock calls herself an infiltrator, and it’s a position that, she said, has garnered her a great deal of support from her community. In a field — and a position — that has long been dominated by whites and yet has had a greater impact on people of color, probation provides an opportunity to help keep people of color, as well as others, out of jail. And a big part of that is bringing in people who have experienced the system, who know it, and who have worked their way successfully through it.

Tullock said she hears from people who offer her their prayers, flowers, and words of support. People tell her, “We’re not going to let you fail,” she said.

“The change that people want to see is not complete elimination, it’s ‘treat me like a human being.’ Deliver something to me that I help to inform. That’s what the community wants,” Tullock said.

The Adult Probation Department supervises approximately 6,000 clients on court-ordered supervision, diversion programs and post release community supervision. It provides court services, supervision and a large portfolio of reentry services, housing, and support for all currently and formerly justice involved individuals. The department also supports 50 treatment programs and 18 housing programs that are managed by community partners through the Community Assessment and Services Center.

Much of Tullock’s appreciation for the potential of probation stems from her own experiences as a young woman. A story she frequently shares recalls her less-than-stellar high school career back in Hollywood.

“It’s hard to be in Hollywood and do well in school,” she said.

Bored, she did well in classes she enjoyed — history, for example — but couldn’t be bothered with the rest.

When her high school informed her she wouldn’t be able to pass because she’d had too many absences between ninth and tenth grades, her father — a Panamanian immigrant — was furious. Tullock, however, tried to brush it off as no big deal.

“Do you think I’m stupid?” he asked her. “You’re not going to school!”

Despite those entreaties from her family, Tullock dropped out in tenth grade. A neighbor who was her friend’s mother, however, wouldn’t let the matter drop, particularly as her own child was on the same path. This also marked Tullock’s first encounter with a probation officer, her friend’s PO.

Nonetheless, her friend’s mother persisted in challenging her son and Tullock to apply themselves.

“You guys need to be doing something,” she told the kids. An immigrant herself, she had come to California from Mexico, managed to get a college education, and ended up working in a university. Tullock, convinced by her friend’s mother, eventually went back to school and got her equivalency degree.

The next step came when her friend’s mother typed up an application for Tullock for a clerk position at the university. She was hardly enthusiastic about the potential job, recalled Tullock.

“I didn’t want to start going to work,” Tullock said with an exaggerated sigh, “but I did, gratefully, because of her.”

All the while, it wasn’t as if others weren’t encouraging Tullock to get back to school. But, as Tullock said, “You never know who it is who’s going to connect with you – their approach, or just something about it. And because of her, I got this job at the university.”

It was “some low-level clerk job,” Tullock remembered. “I think it was, like, answering phones.”

But university employees, as a perk, were eligible to enroll in classes. She began taking courses in subjects that interested her and, with a promotion to another position, began working in admissions. She kept going, Tullock said, with “things just building and building and building,” until she found herself where she is now.

“I don’t live in ‘I dropped out of school in the tenth grade.’ I’m not 20,” Tullock said. “Having to reflect so much, I do see how I’ve always carried that story with me, that one who wasn’t going to let me go, who saw something really smart in me.”

As it happens, Tullock’s friend ended up in prison, and Tullock used to take his mother to visit him there. But when he got out, he learned coding, she said, “right at the point when it was really booming, and he ended up doing really, really well.”

That experience has shaped how Tullock sees probation, not as a sentence but an opportunity.

“At Probation, we have hired people who have been to prison, who have had substance abuse issues, that have that record and that balances so much for us,” she said. “That’s one of the reasons the programming we have challenges us! Bring it! We want to be impactful.”

Probation’s sole purpose, Tullock said, “is for people to not go to jail or prison.”

Both sides of the coin

All of Tullock’s predecessors have been white, except for one person, a Latino who served in the office for a short while, she said. While she speaks highly of all of them, particularly her immediate predecessor, Karen Fletcher, who encouraged Tullock to seek the job, and who retired in 2021 after holding the position for six years, Tullock understands how important it is for others like herself to see her in her current capacity.

“The outcry from the community, just seeing a face that looks like mine, sitting in this seat,” she said. “It’s the face and the perspective, the knowledge you bring, the sincerity you bring, the shared story that you bring. I share a story with a lot of people who have had interactions with law enforcement that haven’t been that great.”

Tullock sees both sides of the coin, she said. When the controversy over the presence of uniformed police in San Francisco’s annual Pride parade was raging earlier this year, Tullock spoke in favor of police participation. The changes that have taken place in the police department over the past decades came about because of the presence of LGBTQ people in the force, she said.

She doesn’t dismiss police officers’ affronts to the community, but she also sees the potential for change.

“By being in the department, by working it day to day, carrying out policies and challenging policies, they’re able to bring about huge changes by being part of the force, because of the work they’ve been doing,” said Tullock.

Banning them from marching in the parade in uniform, she said, denigrates that work.

“It takes a lot of guts to stand as you are,” said Tullock.

And that, in itself, is a victory, she contends. While San Francisco’s incarceration statistics might seem depressing to people with no experience in the criminal justice system, Tullock sees successes.

“What gets overlooked is that incredible opportunity for probation to be that balance that people want. My department’s success is that, when someone completes their probation, they go on their way,” she said.