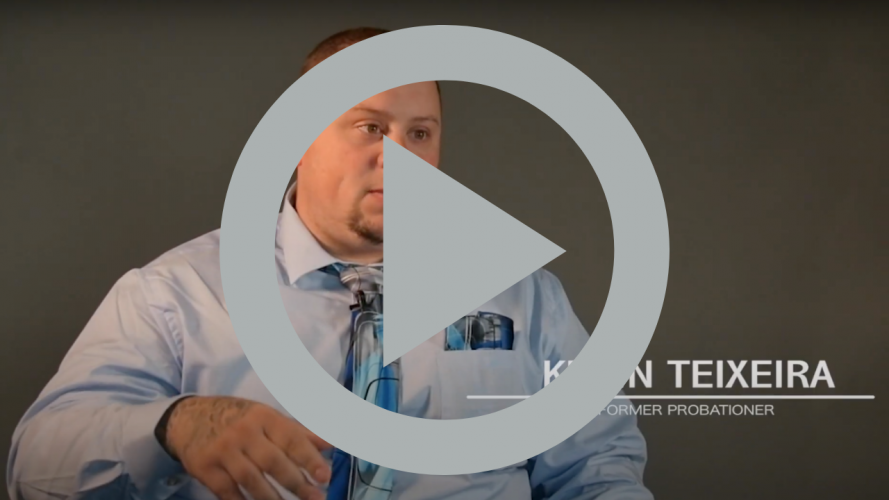 Kevin, a former client of San Bernardino County Probation, is an uplifting story of transformation and success.

After serving three tours in the United States Army, Kevin realized he had to get help after run-ins with law enforcement and several suicide attempts. He found out about San Bernardino County Veterans Treatment Court and was partnered up with Probation Officer Victor Hernandez, who is also a veteran.

“Having a probation officer that’s a vet like me, I didn’t feel awkward. It was like an instant bond with certain guys. Like for Victor right, he’s not in my shoes but he knows and understands the problems and the struggles that I have. So instead of kind of butting heads with each other, you’re like a unit, and I think that’s a big difference,” Kevin reminisces.

With the help of PO Hernandez and the Veteran’s Drug Court Program, Kevin has been able to turn his life around. Once Kevin focused on accepting himself and recognizing the issues that needed work, he threw himself into several hobbies and programs to work on his personal growth.

“[Kevin] is a multi-faceted person. I have never seen somebody really tackle [the program] as hard and as fast as he did,” said PO Hernandez.

Kevin has fully engaged in equine therapy to help with his PTSD, experimental programs, gardening, art therapy, and dog training to name a few.  He also also dedicated himself to volunteering and giving back to other veterans.

“It’s not like candy land, it’s hard work. You gotta put in the work,” Kevin says.

After successfully overcoming many challenges, both Kevin and PO Hernandez consider Kevin’s story a success and shared their experience as an encouragement to other Veterans who may be seeking treatment:

Watch the video to hear Kevin’s story in his own words and celebrate his success.