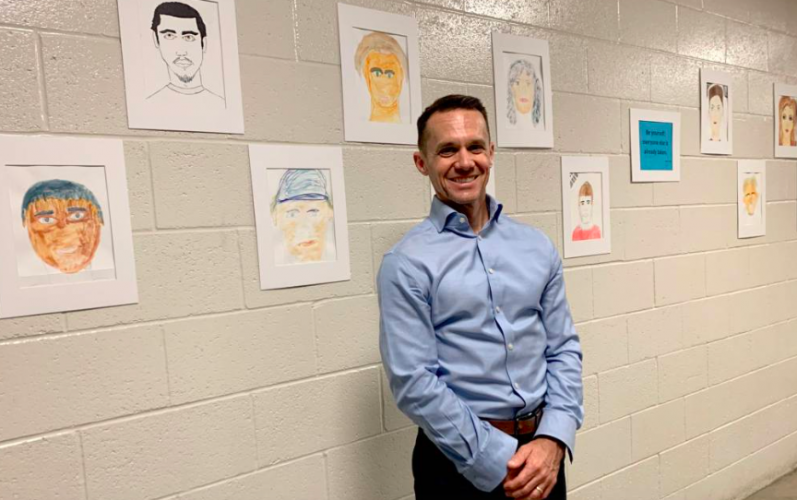 Twenty-one-year-old Reid Butler spent about a year in one of California’s state youth prisons before officials in his home county convinced a court to let him serve his sentence in a county juvenile hall. Known as the Division of Juvenile Justice (DJJ), the state lockups were plagued by violence among youth and abuse by staff, and often meant young people were incarcerated hundreds of miles away from their families for years.

On a weekday this June, Butler was chatting and working in a large room with the other 10 youths serving time in El Dorado County’s juvenile hall. Most of those young people look up to Butler — he’s the oldest young person incarcerated here, and he’s been here the longest.

“Historically speaking, the Division of Juvenile Justice is very … You could call it a cattle house, because it prunes and picks these kids to be in the system for the rest of their lives,” he said. “I think DJJ has tried to do a good job, but it’s very difficult when you’re sending all of your broken parts to the same place. That factory doesn’t have the tools necessary to fix those parts. Those things need to be dealt with on, like, an individual basis.”

By contrast, Butler said, he’s made significant progress here, getting his high school diploma, then earning his associate’s degree through a community college. And, he’s become a model for other young people here.

“It’s very interesting how the kids look up to me … How much respect people have for my advice, of my opinion,” he said. “I’ve learned through my experience that teaching somebody else helps you to learn better … when they succeed, you succeed. When you see people are happy, you’re happy because you’re putting your time and your investments into them. It’s a very nurturing environment to be a leader.”

That’s exactly the culture Brian Richart, chief probation officer for El Dorado County, is looking to create as he — along with the state’s 57 other counties — prepare for the end of state juvenile prisons.

California had some 19,000 youth in custody 20 years ago. But over the past two decades, the state has completely reimagined its approach to dealing with youths who commit crimes, embracing a model of rehabilitation over punishment. There are now fewer than 3,000 young people in state and local custody.

This remaking of juvenile justice will culminate next summer in the closure of DJJ — a change that will require probation chiefs like Richart to house and treat all justice system-affected young people in their home counties.

‘You could call [DJJ] a cattle house, because it prunes and picks these kids to be in the system for the rest of their lives. I think DJJ has tried to do a good job, but it’s very difficult when you’re sending all of your broken parts to the same place.’Reid Butler, 21, currently serving a sentence in El Dorado County juvenile hall

It’s a change prompted by not only a sharp drop in youth crime over the past few decades, but also state laws that limited jail time for young people and new research about what actually helps turn kids’ lives around. But it’s also posing big challenges for counties that haven’t historically been in the business of incarcerating youths for years at a time.

Richart said the biggest challenge now is making his outdated, decades-old juvenile hall feel less like a prison and more like a school, home and therapeutic space.

“This facility was opened approximately 19-ish years ago, but in my opinion, it was designed in the older style and the older modality. So when you walk around the facility, you hear the steel doors close, you see the concrete aspects of the facility, the cinder block walls,” he said.

El Dorado County isn’t alone in this — most counties are working with similarly dated facilities. Some are being rebuilt; El Dorado County is making plans to build a new facility in Placerville. But that will take years, so in the meantime, probation departments are making small shifts to make the current buildings more livable and less prison-like. And they’re focusing on what Richart sees as the most important element: staff.

“Yes, facilities matter, but what matters tenfold are the staff. If you see somebody in a certain way, you’ll tend to treat them that way. And if you tend to treat them that way, they will tend to behave that way,” he said, adding that while the facility is a “limiting factor … it is certainly not something that prevents my staff from actually doing the type of family-based work that we’ve been doing for the last decade.”

That means staff here act more like social workers than cops; they build trust with the youth. The facility has been painted and decorated to resemble a school more than a prison. And young people here spend little time in their rooms; instead they are together going to school, or participating in therapy, family visits or other programs.

But 21-year-old Reid Butler’s sentence also represents one of the challenges for counties: State law now allows youth to stay in the juvenile system up to age 26. That means you could have 12- and 13-year-olds serving alongside young adults with incredibly different needs and experiences.

Down in San Mateo County, probation leaders are grappling with many of the same issues, and are working to create better vocational and educational spaces so that when a 26-year-old is released, they’re ready to get a job.

Jehan Clark is superintendent for the county’s probation agency. As she walks around San Mateo’s facility, she points to a large courtyard anchored by a lawn and a track. Along the side are chickens that youth take care of, as well as garden boxes where they grow food that they’ll later help cook.

Clark said all this makes the common spaces here feel more like a campus than a prison — and that the kids are kept productive and busy.

“These kids are barely in their rooms,” she said. “They’re in school all day. If they graduate or are not in school, they’re doing some type of work. After school they have exercise, which we call our large muscle activity, and then they have dinner, shower, and then they’re in programming.”

But inside the housing unit, like in El Dorado County, things look more like a traditional prison. That is, until you enter a large room painted a soothing blue and covered in bright renditions of sea creatures.

“This is what we call the reef … [it's] our multisensory deescalation room. So for youth who have more, you know, mental health issues, maybe they’re getting some bad news, they just need to kind of calm themselves, kind of stabilize,” Clark said.

Clark, who’s been working in this field for decades, says this room illustrates the shift in philosophy from one that emphasized the institutionalization of young people. Now, juvenile probation officials are trying to create environments that mimic home life so kids don’t have to learn how to act when they’re released.

“Times have changed. Things are a lot different. And so, there is no room for confinement. You know, if a youth has an issue, they kind of can take a time-out, but then they come right back out,” she said.

That also means probation agencies are bringing families into youths’ treatment, since often the problems that lead young people to commit crimes start at home. And in Fresno County in the Central Valley, it will also mean more community-based programs so young people aren’t necessarily locked up in juvenile hall for their entire sentence.

Still, there are worries. This shift has happened quickly. Most of these facilities weren’t meant to house young people for years at a time. And for all its problems, DJJ did have expertise treating the small number of incredibly high-needs young people, such as those who committed sex offenses and arson.

So in Fresno, Probation Chief Kirk Haynes is partnering with other counties to create those specialized programs. He’s retrofitting parts of the facility so they can be used for treatment. But he’s frustrated that state leaders are forcing counties to move so quickly.

“We’ve not had a lot of time and frankly have not had a lot of resources to be able to build up, you know, to have our facilities ready to have all these things done,” he said. The next big challenge, Haynes said, will be bringing Fresno’s youths home from DJJ when it closes next summer.

“But given all of the challenges that have come along with it, I think at the end of the day and in the long run, we’re ready now and we’re going to be even better as the years go by,” he said.

Under state law, Haynes and others have no choice but to try. They’re getting some help from Sacramento — the state budget includes $100 million this year to help make changes to county facilities.

And under the law mandating DJJ’s closure, each county had to come up with a detailed proposal outlining how they plan to handle the changes, including a requirement that they do have “secure” or locked facility options. The legislation also created a new state-level ombudsman for youth in the juvenile justice system and a new Office of Youth and Community Restoration that is responsible for reviewing, evaluating and overseeing county implementation.

In El Dorado County, Mario Guerrero was one of the community members on the local committee. He’s a program manager at the nonprofit Child Advocates of El Dorado County and has worked in youth services here in his hometown county for 20 years.

Guerrero said he’s generally supportive of how the probation department is running juvenile justice here. But he worries about whether communities around the state will step up to help, or stand in the way. He noted that in El Dorado County, Chief Richart’s proposal to build a regional facility to house and treat sex offenders from several counties was killed by the local board of supervisors.

Guerrero said in order for young people to actually be rehabilitated, it’s going to take a village.

“For those who might be a little bit skeptical or unaware, we understand those fears,” he said. “But the reality is these kids are really amazing kids. They have a lot of potential in life and they just need a lot more guidance and support to be steered in the right direction. But most of them are really, really gifted and amazing kids that just need a little bit of love to find their way.”

Big changes are planned for San Francisco’s beloved Castro Theater, which celebrated its 100th birthday this year. Live music promoter Another Planet Entertainment, which now manages the storied venue, wants to restore and renovate it. That includes replacing the orchestra style seats with removable ones allowing for standing room concerts. But more than five thousand fans of the theater have signed a petition opposing the renovation. We’ll talk about the future of the Castro Theater and we want to hear from you. Share one of your favorite memories from the Castro Theater.