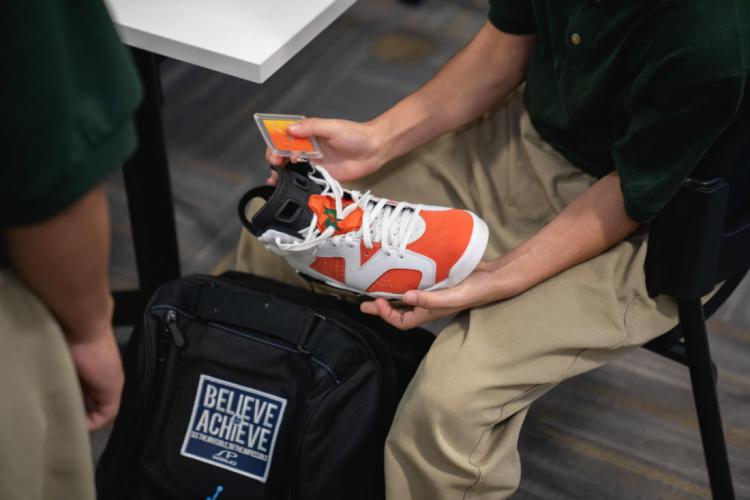 Eight current and former youths in custody in San Benito County Juvenile Hall were celebrated on Jan. 8 in a virtual graduation ceremony for a new program called Believe to Achieve, which teaches participants about goals, responsibility and accountability. Half of the residents remain in juvenile hall, while the others completed the program upon release.

At the graduation, participants—ranging from 15 to 18 years old—received a certificate, new pairs of shoes, a Jordan backpack, as well as remarks from Shoe Palace officials. The shoe company, which helped fund Believe to Achieve in the county, provided all program supplies including books, markers, pencils, and poster paper.

Jonell Casada, a supervisor at San Benito County Juvenile Hall, said some of the youths weren’t able to understand what led them to being held at juvenile hall prior to participating in the program.

“It was huge to see that they actually got inspired and believe that they could become something better than themselves,” Casada said.

When the program began, 18-year-old Jose Torres had been in juvenile hall four times. Growing up, he said he attended about 12 different schools because he was always getting in trouble and getting suspended. He is currently serving a three-year probation sentence and has to pay restitution for an assault with a deadly weapon charge.

The program has changed his outlook on life. He said Howard White, author of “Believe to Achieve,” and his experiences of growing up with nothing and eventually becoming the vice president of the Jordan brand inspired him.

Determined not to let his past actions dictate his future, Torres is close to obtaining his general education diploma, something he began working toward while in juvenile hall. He plans to pursue a college degree and become a social worker to help youth.

“I learned a lot,” Torres said. “How to be consistent and to not give up no matter how things get. There’s always going to be open doors for you.”

Ramona Trevino, a juvenile hall volunteer and New Life Fellowship Church pastor, pitched the program to Casada after she was introduced to it by her daughter Kristine Padilla, who taught it at San Jose’s Police Activities League (PAL).

Though the program is meant to be done in 10 weeks, Trevino said they were able to complete it more quickly as they worked through it during winter vacation from school.

Trevino said the kids mean a great deal to her and Casada, but the support provided inside juvenile hall essentially disappears when the kids are released, especially during the COVID-19 pandemic.

“When the youth are released they meet with probation officers, but cannot meet with other partnering agencies because of COVID-19,” she said. Among the agencies providing support is Youth Alliance.

That’s where White’s program aims to help the youth.

“It’s just a book on how youth can just get to their dreams, passions and how to put negative thinking outside, away from them,” Trevino said.

While juvenile hall has been providing life skills programs such as interviewing or applying for jobs as well as guest speakers, Believe to Achieve goes beyond that. Trevino said the program has chapters on love, faith and motivation.

Local youths did projects that covered all 17 chapters of the book to help them focus on their goals and outline the steps necessary to achieve those goals. Those outside juvenile hall worked individually with Casada and Trevino.

The projects led the participants to discuss what habits might prevent them from reaching their goals, as well as habits and strengths that would bring them closer to their goal.

Trevino said what impressed her about the first year was the openness of those who embraced the program. She said it was a huge step when participants identified the actions that prohibit them from achieving their goals.

The program would not have come to San Benito County without the partnership with Shoe Palace, Trevino said. It also published a video of the program at the juvenile hall on its Instagram page.

Shoe Palace Vice President of Product and Marketing Robert Brack lauded the youths’ transformation through the program, which the company launched in October 2019.

“To see these kids that were at the very first class, didn’t want to speak, hoodies on, covering their faces and different things, to just blossom through the program and really come out and see their light shine, if you will, is really exciting and empowering to watch,” Brock said about the youth at PAL.

Seeing its impact at PAL, Brack said he was really excited to bring the program to San Benito County Juvenile Hall. He said at the graduation ceremony the youths read prepared statements on how they were affected by the program. He also said facility officials shared that they had seen a change in some of the youths who had been there several years.

One of the program’s components is providing youths with mentors who share their experiences and talk about the steps they took in order to achieve a career goal. Brack said past speakers have included San Francisco 49ers executives, and players including Jimmy Grapallo and George Kittle have participated in graduation ceremonies. That didn’t happen on Jan. 8 because of the pandemic.

Casada said juvenile hall is always looking for residents who are interested in participating as guest speakers. She said it involves talking to the youths about their careers and what that entails.

“Sometimes they don’t know what is out there and what jobs they can do,” she said. “It just gives them an insight that they can be whatever they want to be just for inspiration.”

The 15 or so programs juvenile hall offers throughout the year to promote behavioral changes have helped reduce the number of youths housed in the facility.

According to the Board of State and Community Corrections, San Benito County Juvenile Hall’s average daily population has been steadily decreasing since 2002, a trend that’s been seen statewide. From January to September 2020, the facility averaged 6.1 youths—the lowest number since 2018. The highest population average occurred in 2003 with 19.7 youths.

“We’re a small facility and we do have great programs that work on changing behaviors and I also think our chief and CPOC [Chief Probation Officers of California] are huge with understanding that not everybody needs to be in the hall. They changed that idea. So some of them are handled out of custody. The ones that have to be in the hall for whatever reason, these programs are specifically working on changing behavior and ultimately when you change their behavior they are not out committing crimes.”

Read the full story on BenitoLink.