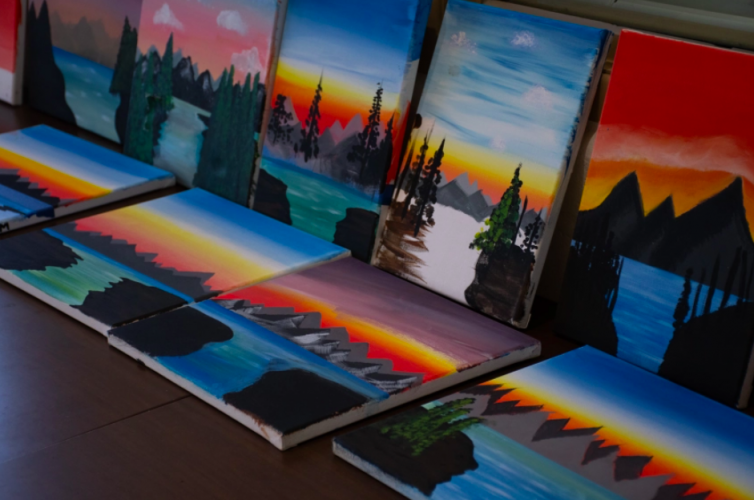 By Molly Gibs in the Monterey Herald

In partnership with the Homeboy Art Academy, the Monterey County Juvenile Hall has kickstarted a new rehabilitation program for incarcerated and formerly gang-involved youth to reconnect with themselves and the world through art.

“There’s no judgment in art,” explained Homeboy Art Academy Executive Director Fabian Debora. “I think the freedom of expression allows for you to be you without having to live in the confinement of anything … I see that art serves as a conversation and a spiritual dialogue with something bigger than yourself.”

Homeboy Art Academy is a division of Homeboy Industries, the largest gang rehabilitation and re-entry program in the world. The academy serves over 75,000 youth and adults each year in the Los Angeles area, encouraging healing and transformation through art exercises and workshops.

The program is one of the ways the Monterey County Probation Department is working to provide innovative approaches toward rehabilitating youth as big changes come to California’s youth justice system.

As part of Senate Bill 823, California’s State Division of Juvenile Justice (DJJ) – which currently houses and treats youth who have committed the most serious crimes – will be closed by June 2023. The bill, signed in September 2020, transfers the responsibility of all youth inmates to counties to be housed and treated locally.

Executive director of Homeboy Art Academy, Fabian Debora, discovered the gift of art when he was six years old. He joined a Los Angeles gang when he was 12 and spent over a decade in prison. Now he has helped over 75,000 incarcerated youth and adults each year heal and transform through art (Molly Gibbs – Monterey Herald).

Assistant Chief Probation Officer Jose Ramirez explained that the idea for the partnership came as the county considered how to adapt to the closing of the Division of Juvenile Justice.

Debora’s experience with rehabilitating adults and youth through Homeboy Industries and the years he spent in incarceration inspired the idea for the partnership. Probation Division Manager Julie Kenyon said that the department hoped that Debora’s story would resonate with some of the youth and inspire them.

Around 16 individuals will participate in the program’s first cohort, followed by a second cohort after the program’s initial 16 weeks.

The participating youth range in ages from 15 to 19 years old but all are long-term residents facing felony strike charges.

California’s “Three Strikes” law, enacted in 1994, significantly increases the felony prison sentences of individuals who have been previously convicted of a violent or serious crime.

The law doubles the prison sentence for “second strikers” and gives defendants a prison sentence of 25 years to life if they are convicted of three or more violent or serious felonies.

Under the law, a prior juvenile felony conviction can count as a strike if the individual was 16 years or older at the time of the prior offense and the prior offense was considered a serious or violent felony.

As part of Senate Bill 823, California’s State Division of Juvenile Justice (DJJ) – which currently houses and treats youth who have committed the most serious crimes – will be closed by June 2023. The bill, signed in September 2020, transfers the responsibility of all youth inmates to counties to be housed and treated locally (Molly Gibbs – Monterey Herald)

Robert, 18, has been at the juvenile hall for about two years. (The Herald has chosen not to further identify residents with respect to the wishes of the Probation Department.)  He said that although he doesn’t have much previous art experience, he enjoys expressing himself through art because it’s “kind of like therapy.”

“I think with this particular (program), everyone’s so excited,” Robert said. “I mean, (for) someone like (Debora) to come and teach us, especially having a similar story that resonates with most of us.”

Throughout the 16-week program, Debora will lead art classes and exercises via the Zoom video platform once a week. After sharing his story with the group, he gave them their first assignment: sketch a meaningful person, place or object that brings them peace.

“This one is called the window to your soul,” he explained. “I shared (mine), now I want to get a little glimpse and window to their soul … this is now inviting me to begin to see what is of importance to them to keep them moving when something is starting to discourage them.”

Debora encouraged the youth to use their sketchbook like a journal to learn more about themselves and track their progress. He hopes to build a relationship with the youth and help them reconnect to themselves and the world.

“Everything is about reconnecting and connecting with self interpersonal connections for a healthy way of living,” Debora explained. “Most important is the healing, the mindfulness, the things that take place in this dialogue and conversation that they’re currently having as they’re sketching. That’s where the process is.”

But Debora warned the group that the process won’t be easy.

“It gets harder before it gets better,” he told the group. “You get what you put in…this is just a phase of your life, it’s not over…are you guys willing? Are you guys ready?”

A resounding yes filled the room.