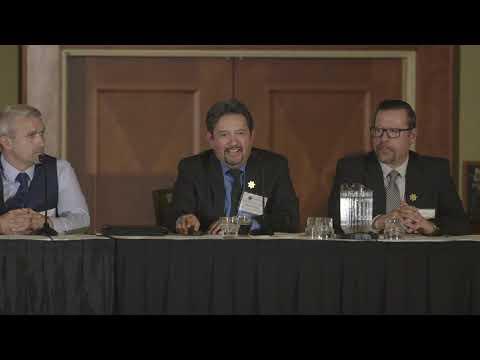 As a child, Steven grew up with neglectful parents and was placed in a group home. He had a very rough life in and out of the system for what felt like a lifetime. Steven suffered from an addiction to harmful substances and alcohol.

He always wanted a change in his life but never knew how to ask or get the help he needed.

After years of unsuccessful attempts to get his life on a better path, Steven and his family moved to Stockton.

Upon his release from a stay in prison, Steven was allowed to join an innovative and alternative program in San Joaquin County known as the Passport Program.

In 2015, San Joaquin County Probation started the Passport Program as part of its Day Reporting Center (DRC) redesign with SB 678 funding. With the assistance of the University of Cincinnati Corrections Institute, the DRC expanded Evidence Based Practices (EBP) offerings and implemented a new phased program for moderate-high or high-risk clients.

The Passport Program provides participants an individualized ‘passport’ that outlines the specialized programs to be completed, with each clients’ passport plan individualized to their specific needs.

The faster they complete the program, the faster the department recommends their probation be dismissed. Clients are also offered incentives after each phase completion.

Steven had known he needed to redirect his life, but the moment that was most hard-hitting for him was when his daughter wrote him a Father’s Day card saying “Steven” instead of Dad. He knew something needed to happen and threw himself into the Passport Program determined to change the course of his life.

The program’s staff got him comfortable with engaging in the program, always friendly and helpful, Steven remarked. He also met others who successfully went through the program which inspired him to finish it. With time, effort, and commitment, he eventually became a graduate of the passport program.

“If you don’t have any foundation, any guidance, anything, you just go back to what you’ve always done. Even though you hate it the most. I found myself this time, in Officer Beltran’s office…. I started believing again, and I was liking going to this program and it honestly started becoming the highlight of my day,” said Steven.

The Passport Program incorporates partnered community-based organizations (CBOs), behavior health, and therapy professionals who are trained to engage clients consistently every week (25 classes per week) throughout their three-phase system. The first two phases meet certain needs, including social skills, problem-solving, and identified criminogenic needs using assessment tools to identify things like aggression and drug addiction. The last phase has clients meeting with their probation officers who are trained in Effective Practices in Community Supervision (EPICS) and has them taking advantage of advanced therapeutic classes that teach professionalism, social skills, and therapy programs like Aggression Replacement Training (ART) among other skills.

The first graduating class in 2015 consisted of 25 people, who all had positive feedback about the program. The feedback encouraged the department to expand the program to all departments, like those on Post Release Community Supervision (PRCS), youth served by the probation department, and for the youth in juvenile hall.

For the most part, those who complete the Passport program are highly motivated, as it is up to the client to determine how long it will take to complete.

Notably, the research and data analyzing the success of the program proved the more hours clients spent in the Passport Program the more participants’ success rate went up. An outside evaluator found that as clients received more dosage hours, their recidivism, both arrests, and convictions, decreased. Across the board, it was a 20% reduction.

After graduating from the Passport Program, Steven became a college student studying for his AA in Psychology to become a drug and alcohol counselor and is considering pursuing higher education as well. Steven says that Probation Officers are some of the most caring people he has ever met, and the positive energy of the staff helped him stay motivated and complete his program successfully.

Steven remarked, “28 years of shame, regret, and addiction…so so many years of hidden tears ended at the passport program where I was able to feel valued. Where I was encouraged. Where I was welcomed every day. And I’ll be forever thankful for that.”