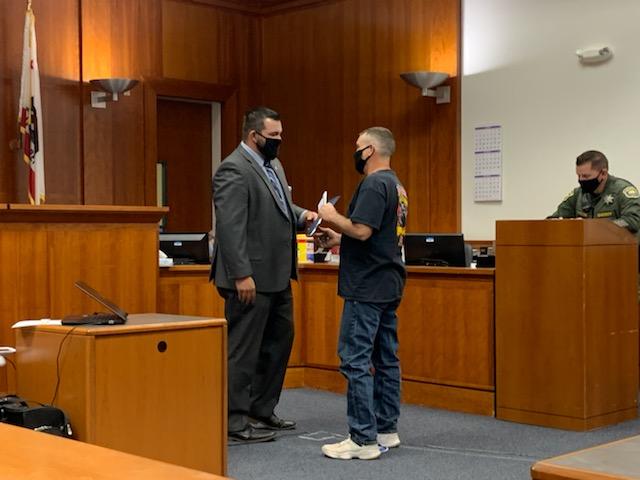 The Butte County Probation Department was proud to announce the graduation of two of their Veterans Treatment Court participants. Veterans continue fighting even after their military service has ended as they struggle with substance abuse, mental health, and reintegrating into civilian life. With the help of the Veterans Treatment Court team, these clients complete an intensive treatment program and period of probation supervision lasting at least 12 months.

Both graduates fought hard to address their needs, complete the program, and have achieved a tremendous accomplishment. Below are selections from the press release Butte County released announcing the graduation:

Oroville, October 20, 2020 — Brian Dudley, an honorably discharged U.S. Army veteran, was facing a possible prison sentence for felony Assault with a Deadly Weapon and misdemeanor Driving Under the Influence. In October 2018, Mr. Dudley was accepted into the Butte County Veterans Treatment Court.

Both men struggled with Post Traumatic Stress Disorder (PTSD) and alcohol abuse resulting from their military service. During their participation in the Veterans Treatment Court, they completed anger management classes, participated in intensive PTSD treatment with the Department of Veterans Affairs, and were closely supervised by the Butte County Probation Department.

Our state legislature has declared; “It is in the INTERESTS OF JUSTICE to restore a defendant who acquired a criminal record due to a mental health disorder stemming from service in the United States military to the community of law-abiding citizens.” (Emphasis added). Veterans Treatment Court follows the National Drug Court Model and is tailored to the unique needs of veterans. Butte County Veterans Treatment Court has been in existence since July of 2015.