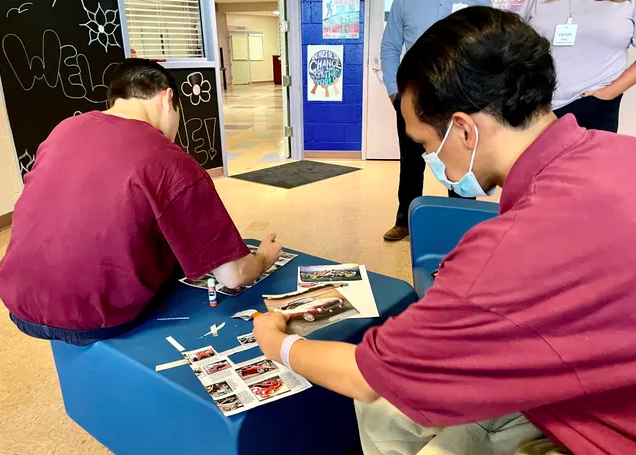 One Thursday afternoon last month, a dozen high school-aged boys, all in matching maroon shirts and khaki pants, filed into a small activity center on the grounds of the Ventura County Juvenile Justice Center in Oxnard

The group gets an hour in this clubhouse each week with staff from the Boys & Girls Club of Oxnard and Port Hueneme, sometimes a spare hour in the gym next door.

“I like it here,” Adrian, 15, said while he thumbed through a pile of hot rod magazines, hunting for photos for a personal vision collage. “Escape from the block.”

The Star does not use full names of juveniles involved in crimes.

The clubhouse gathered dust for the first two years of the pandemic while the center, where youth wait for court dates or serve jail time, shut down most outside programming.

With coronavirus cases dwindling, those programs are coming back. The Boys & Girls Club was one of the first groups to return, hiring a full-time staffer to run the clubhouse.

That week, the group gathered around a pile of magazines, filling collages with photos of cars and vacation homes – but mostly cars.

Erin Antrim, the CEO of Boys & Girls Club of Oxnard and Port Hueneme, said the nonprofit hoped to give incarcerated youth a similar experience to their three regular clubhouses, including career prep, leadership development and, of course, recreation.

The clubhouse schedule is packed five days a week from 10 a.m. to 6 p.m., Antrim said, with groups from individual housing units able to visit up to four hours a week.

The clubhouse, which opened in 2007, was the first in California to open in a secure facility and just the fifth in the country.

Mark Varela, the county’s chief probation officer, worked on the launch and said he had trouble convincing some of his colleagues that bringing pool cues, pool balls and scissors into the facility was a good idea.

“They thought I was a little out there,” said Varela, an Oxnard native who went to Boys & Girls clubhouses as a child. “It was something the kids really valued.”

That initial partnership has continued even as practices have shifted and the center’s incarcerated population has dropped.

The center opened in 2003 with a capacity of 420 individuals. At its start, it housed an average of 200 a day, Varela said. That Thursday, according to Chief Deputy Tim Dowler, just 57 stayed at the center.

Varela said the county, along with much of the state, has gradually changed the way it addresses minors convicted of crimes over the past decade. Instead of jail time, youth are often granted a range of probationary punishments.

“These kids are just kids. They have barriers typical kids don’t necessarily experience,” she said. “(This) is a much more restorative approach.”